It goes without saying that an album is special when it makes you struggle with expressing how you feel about it because you want to do it justice. This is the case with me and Miley Cyrus’ new album ‘Plastic Hearts’. I knew how special this album was going to be but it never really struck me until I started listening to it. Once it ended I was overwhelmed at how far this album exceeded my expectations.

With ‘Plastic Hearts’, Cyrus details her experience with romance in a raw, emotionally-rich and tantilizing album. It truly feels like she’s found the perfect home with the rock genre. A majority of us have seen her career grow from the very beginning, I was definitely there during her ‘Hannah Montana’ era and I’ve mostly loved everything that since. While ‘Younger Now’ felt like an ironically tame version of Cyrus, it did have it’s memorable tracks. Her EP, ‘She Is Coming’ felt like a return to form for her creatively. ‘Plastic Hearts’ however goes beyond return to form because I would argue that this rivals her entire discography in quite an intimidating manner. It’s not easy for me to fall in love with an album on my initial listen but that is exactly what happened with ‘Plastic Hearts’.

Miley Cyrus rocking a Blondie shirt, the band who originated the track ‘Heart of Glass’.

As of writing this review, I have just listened to the insightful and intimate Zane Lowe interview for ‘Plastic Hearts’ and I’ve just listened to the album for the fourth time. I wanted to really dig deep into the making of this album and try to capture as much detail as possible before talking about it. The rollout for this album was one of the best of the year. Her hit lead single ‘Midnight Sky’ put her back into the public eye as a new type of artist which was only solidified by her incredible cover of Blondie’s ‘Heart Of Glass’. Not only does she look the part but she brings the stage presence, raspy vocals and charisma as well. Make no mistake, Miley Cyrus is a rockstar.

While her past work has always shone a light on her voice, ‘Plastic Hearts’ made it the shining star. This album has solidified Miley Cyrus as one of the best vocalists of our time. The only work I can compare this to in terms of power and robustness is Lady Gaga’s performance on the ‘A Star Is Born’ soundtrack. Match that with the insanely infectious melodies and you strike musical gold. Having listened to more music than normally this past year, I developed an ear for original melodies. I love a song which gets stuck in your head the moment you hear it and that is precisely what this album is made of. The dark and emotional track ‘Hate Me’ includes a playful chorus sonically with impressive high belting on the first verse which descends in tone in the next. It’s also incredibly admirable how the features in ‘Plastic Hearts’ never take away from Cyrus. There is an equality to the features that’s very rare, the features here are true collaborations. There is a very tangible passion shared between each featured artist and Cyrus which makes the tracks all the more enjoyable. It really is an album which makes you eager to learn the lyrics and sing your heart out. 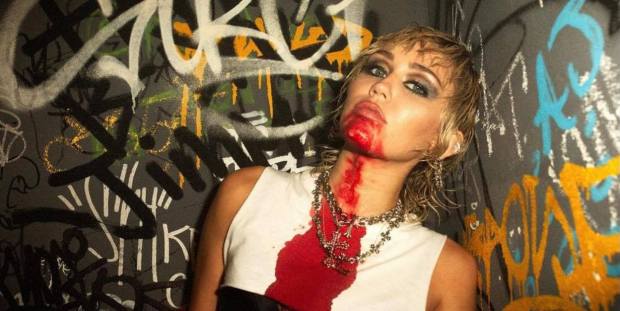 Cyrus on the set of her latest music video, ‘Prisoner’ with Dua Lipa.

Despite it’s rather dark outlook on romance, the album itself is ironically a marriage between rock anthems and deeply emotional ballads. The beauty of this album is that it has a variety of sounds and yet the album feels cohesive. Cyrus weaves a story of heartbreak, lust and feminine freedom through the songs making the album truly feel like a journey. One thing that you cannot deny about Cyrus is that she’s a painfully honest songwriter and it comes through in every project she’s made, ‘Plastic Hearts’ is no exception. Sonically, while the lead single ‘Midnight Sky’ can feel slightly repetitive after The Weeknd’s ‘Blinding Lights’, the rest of the album never suffers from that comparison. The biggest trend in music this year has been the resurgence of the seventies and the eighties. The Weeknd revived synth, Dua Lipa revived disco and Miley Cyrus revived rock. Despite the album arriving a little late to the trend, it is easily one of the best uses of this nostalgic trend. It’s a love letter to that era of rock and it will undoubtedly carry that timeless quality.

The Album Cover for ‘Plastic Hearts’ 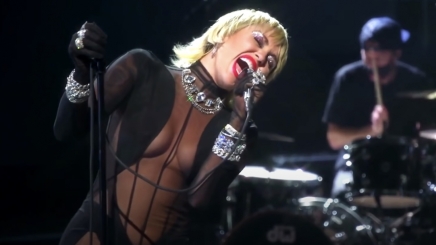 Cyrus performing a cover of Blondie’s ‘Heart of Glass’.

A well-structured album will have a great opening and a closing track which rounds up everything together and gives closure. The explosive opening track ‘WTF Do I Know’ makes it abundantly clear that Cyrus means business. A riveting track about the uncertainty of leaving someone you once thought was your soulmate. Understandably so, her past relationships play a big role into her peception of love and who she is as a person. Tracks like ‘Angels Like You’ and ‘Never Be Me’ are heartbreakingly honest. She owns up to not being the ideal partner no matter how hard she tries. The lyricism in this album is truly something to behold because of how raw and real it is. I can only think of a few artists who write with such honesty. The closing track ‘Golden G String’ puts a spotlight on how women are treated not only in the industry and in the media but also in general. Her referencing all the hate that she received for simply expressing herself in a world where not much has changed is a true despair. The decision to open the album with a rock anthem and close it with a country inspired track really reflects the entire album on a musical level.

Overall, ‘Plastic Hearts’ clawed its way up to being one of my favourite albums of the year. It’s a near-perfect concoction of honest lyricism, infectious melodies and a vigorous singer baring it all. I couldn’t be prouder of Miley Cyrus, I genuinely feel like this was the album she was destined to create. Listening to the end of the album for the first time was really overwhelming and emotional for me seeing how far she’s come and I’ve never experienced that with any other artist. ‘Plastic Hearts’ is an album I will be gladly consuming for months on end and appreciate with each listen.

‘Plastic Hearts’ is now available to stream and to purchase on CD.