We Bare Bears: The Movie is directed by series creator Daniel Chong. This movie follows our three favourite stacking bears, Gizzly, Panda and Ice Bear as they get chased out of their homes and onto the run. With no chance of going back home and no clear path ahead of them, these brothers will have to stick together and face their toughest obstacle yet! The movie stars the voice-talents of Eric Edelstein, Bobby Moynihan, Demetri Martin, Marc Evan Jackson and Keith Ferguson.

Even though it is crazy to think that We Bare Bears is technically over with this movie, it is unfortunately true. I still think of this show as new and to see it come to an end is rather bittersweet. It is not totally sad because we know for a fact that there will be an upcoming spin-off. While I am a fan of this world and these characters, I wouldn’t compare it to other modern Cartoon Network hits like Adventure Time or Steven Universe because they’re on different levels. I have not seen every episode just a couple on TV and from what I’ve seen I liked. The show has a very calming, aesthetically-pleasing and wholesome energy to it which was honestly refreshing. It was nice to see a cartoon which didn’t have a serious over-arching plot or was too dumb for adults to enjoy. The movie replicates that same energy and adds a layer of sophistication to the story.

First off, I have to really applaud the movie for sticking to its incredibly relevant themes. I don’t want to say that the movie is political because its message is to treat different people with the same respect you would give to someone who looks like you. That is not political, it is basic human decency but considering the state America has been in these last four years, you might as well call it political. The stark comparisons this movie draws in it’s third act really surprised me, I did not expect it to go that far. Rest assured this is a movie for children and it’s perfectly safe for them to watch but the theme of family separation and the use of cages in the third act is eerily similar to what is happening in America right now. The antagonist played by Marc Evan Jackson from The Good Place (I knew I recognized that voice somewhere) was actually intimidating. I love villains who are actually smart and they know what they are doing and how to achieve it. It makes them more terrifying and while the people he represents are nowhere near as smart as he is, the reasoning and pure hatred is portrayed as realistically as it can in a movie like this. 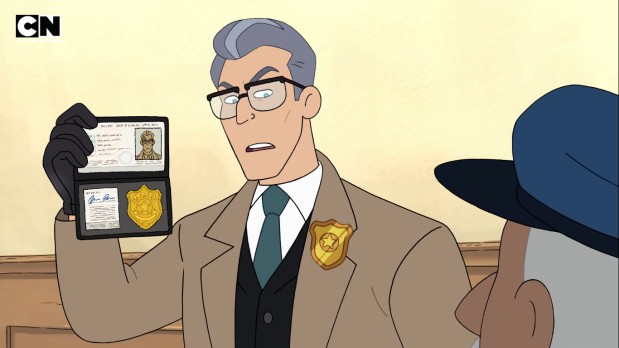 While We Bare Bears: The Movie stuggles to find it’s feet during it’s first act, it progressively gets better and better. The first act feels like two episodes mashed together. Overall the movie has a habit of introducing story elements that get wrapped up in a couple minutes, almost like an episode would. The fact that this movie shares some striking resemblance with Pixar’s Onward doesn’t help either. There is a scene where the brothers argue over which lane the van should go and I swear it could honestly be played side-by-side with an exact same scene in Onward. Obviously I am not saying this movie ripped it off but it was so similar that it was worth noting. Thankfully the story picks up quite a bit in the second half and I really got into it. I liked Grizzly’s emotional journey in this movie. It provided a new brotherly perspective which helped distinquish the relationship from the one in Onward.

For a movie that is only an hour and six minutes, the movie really dragged for me at first. The characters, setting and animation are very entertaining to watch and they will definitely keep the children’s attention. I also really liked how the movie tests Grizzly, Panda and Ice Bear’s brotherhood. The voice-cast does just as wonderful a job here as they do in the show. I love the overall of message regarding family. My favourite line from the movie is in the opening scene when we see them meet for the first time. When Panda points out how different they all look, Grizzly exclaims how that’s the best part. Being different is a great thing and that is such a wonderful lesson for children to learn. The ending of this movie is a beautiful and hopeful ending that services both the movie and the original show. It was incredibly heartwarming and wholesome as it paints the society in this world with a new brush. For a show with such a loving atmosphere, the ending of this movie is perfect. Keep the credits rolling for some extra-cute footage.

Overall while this road-trip starts off with a rocky start, We Bare Bears: The Movie picks up the pace and manages to progessively get better. It’s use of modern and relevant themes are worth noting as they are presented in such a way that children will understand and take away what is needed while adults will appreciate the child-friendly version of what is actually happening to America. It’s not as dark as what is actually happening but the movie can get awfully close when it comes to family separation. Despite it’s heavy themes, the movie still manages to be a fun, often light-hearted adventure children will enjoy.