With the fourth season of the hit anime, ‘My Hero Academia’ coming to a close, it is time to look back on a season that was just as weird as it was frustrating. This season we follow Deku as he goes under Sir Night Eye’s agency alongside Mirio Togata. They plan to uncover the dark secrets of the Shie Hassaikai who are run by the menacing Overhaul, a man with the quirk of destruction and reconstruction. When they find out he is holding a defenseless young girl captive, they do everything in their power to rescue her!

This review will contain major spoilers for My Hero Academia: Season 4

My Hero Academia is the show that got me back into anime. I say this every single time I talk about this show, it’s become a running gag at this point. I was on an anime high in my tween years but then I started to gravitate towards western animation more. That is until this show peaked my interest, since then I’ve been watching anime far more than usual. I love this show, it has a magnetic and inspiring energy that just gets you pumped up. I think I can speak for everyone when I say that watching these characters grow and improve and become what they were always meant to be is something inspiring. It’s like an endless reminder to always try your best and to keep going but above all that anyone, no matter the circumstances can be whatever they want to be. We all see a bit of ourselves in Midoriya and it only makes sense that when we see him succeed, it feels all the more special.

Now with Season 4, I think that most fans of this show can agree that this season is definitely its weakest. To me, the major problems with this season lie in twovdifferent factors. The first is more of a factor for me than anyone else. This is actually the first season I saw weekly when it aired instead of binging and that has its own disadvantage especially during the second half with Gentle and La Brava arc which bored me to death. The second factor is the infamous sub/dub battle. I personally prefer subbed anime but with this show I go back and forth. I started with the dubbed version but switched to sub when they fell behind. I enjoy both but I feel like for the second half of the season which requires a lot of comedic timing and absurd lines, I should have definitely watched the dubbed version. Since I don’t know Japanese and there is that barrier, I feel like it affected the comedic timing and delivery. When I rewatched certain scenes in dubbed, I was surprised to find how funny they were. Mirio (Ricco Fajardo) and Deku (Justin Briner) on their way to the Shie Hassaikai Headquarters.

The biggest enemy of Season 4 wasn’t Overhaul or Gentle Criminal, it was the pacing. The season starts out fairly well-paced, sure we get another damn filler recap premiere but the next five episodes are mostly great. We get an amazing and truly intense interaction between Deku and Overhaul when they first meet. However by episode 7, we are already raiding the Hassaikai’s headquarters, this would eventually lead to four episodes of the team chasing after Chisaki/Overhaul. The entire Nighteye seeing All Might’s fate bit never really served any purpose and I highly doubt the manga has even gotten to it yet. Considering the restricted time limit they had to tell the story, I think it would’ve been better to cut it out and give it to Mirio who barely got any time to shine before the spotlight was taken away from him so cruelly.

I really couldn’t stand how the first half of the season treated its characters. Deku barely got any chance to shine which you could say paid off in the epic 13th episode but I sorta disagree. We have been seeing Deku train intensely and get nowhere. He lost the battle against Kacchan in Season 3, he did nothing for the majority of Season 4A and when he did do something like go Full Cowling 20%, he still missed the shots. Even when he went Full Cowling 100%, it was because of Eri. We have yet to see this training take effect. The newcomers Nighteye and Mirio barely got any screentime even though they were heavily used in the promotional material. I really couldn’t stand the fact that they took Mirio’s quirk away. It wasn’t needed and even if it had to happen, we still never saw Lemillion reach his full potential. It’s not like we got an amazing fight scene with Lemillion and Overhaul, what we got was a PowerPoint Presentation. They really took a great character and threw him out the window. As I said, I don’t read the manga but I believe that not even the manga has attempted to give Mirio his quirk back. It’s honestly a shame. 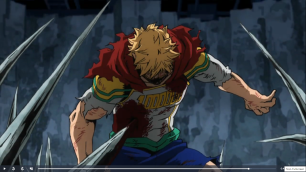 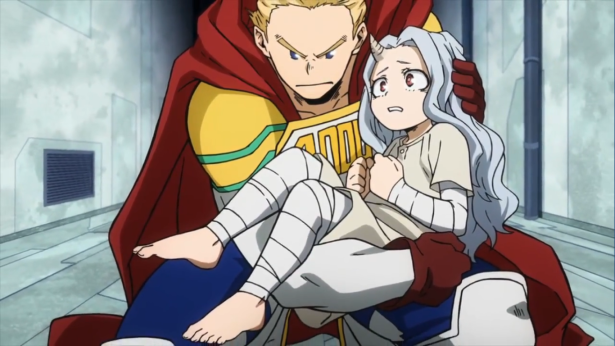 The fact that the Overhaul arc was shortened is even more frustrating now because it’s not like the second half of the season was anything special. I understand the purpose of the School Festival Arc, in fact, I really liked it because it reminds us that these students are still kids at the end of the day and they needed to take a breather from the intensity of Overhaul. I understand that but what I don’t understand is Todoroki and Bakugo babysitting for an episode and a half. I feel like if I binged the season, I wouldn’t mind, but I didn’t binge it, I watched it weekly and I also watched my interest decline at a rapid rate. Granted, we did get that magnificent Glamoroki moment which was worth it if we’re being honest. However we then we get the Gentle and La Brava “arc” which again, I feel like I would’ve loved them if I binged the episodes. They’re not exactly exciting or well-written, maybe the manga did them better but I honestly couldn’t care less about them. 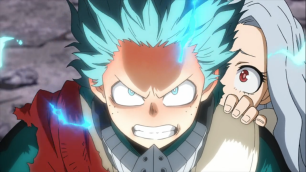 Now, time for some positives! Mirio Togata! I would die for this character. He is a literal ray of beaming sunshine and positivity. He must be protected at all costs. I really hope that they bring him back into the fold one way or another, he deserves better than to be introduced solely so he can be a tragedy. I also loved the actual School Festival episode, in fact it’s probably my favourite episode of the entire season, next to the finale and episode 13. It felt incredibly rewarding seeing Eri smile for the first time, it actually brought tears to my eyes. I love Mirio and Eri together, they are wholesome and adorable. The episode ‘Infinite 100%’ made me jump out of my chair and scream with anticipation, it was a wave of adrenaline and hype. I felt like I was witnessing anime history. Seeing Deku reach that insane level of power was truly one of the standout moments of the series. 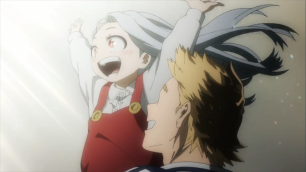 Now let’s talk about that Season Finale! First off, Hawks makes his highly anticipated debut and I have to say I understand the hype. I am obsessed with this guy, I love his design, his out-of-the-box thinking and the sass he provides. He is one of the best additions to the series yet and I can’t wait to see where they take him. Endeavour also gets more attention this time. I love the inevitable pressure that was put on him after All Might’s retirement and I love the fact that he’s trying to become a better person. He is trying and that is very admirable. It still doesn’t justify the abusive past he put his family through. Seeing such an incredible season finale really saddened me because I wanted to love this season and I ended up loving parts of it. The end-credits scene sure as hell gave me hope for the fifth season though. The show is finally going back to giving us more about Deku’s story and his quirk and I hope we get to see more progress and development on that in Season 5! 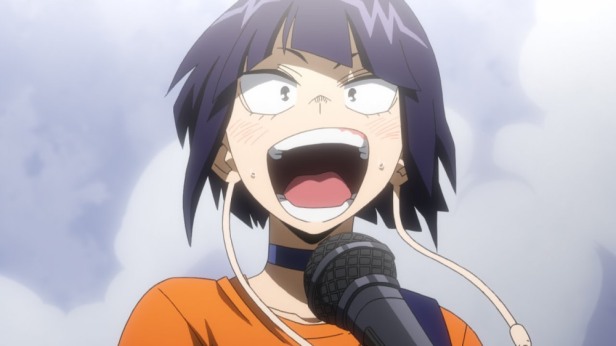 Remember to wash your hands, stay safe and stay inside! Deku, Mirio and Hawks would want you to!