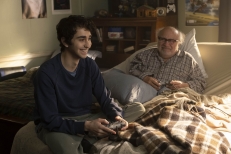 Alex Wolff and Danny DeVito star in Jumanji: The Next Level. 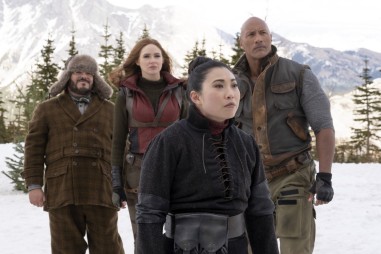 Jumanji: The Next Level is directed by Jake Kasdan and it is the sequel to 2017’s Jumanji: Welome to the Jungle. Set a year after the events of that movie, Spencer, Martha, Fridge and Bethany have formed quite a strong friendship or at least the latter three do, Spencer is struggling with his life and he wishes that he can go back to the way things were so he tries to fix the game only to get stuck in it, now his friends have to go in and save him but since the game is broken, things are not exactly how they left them. The movie stars Dwayne Johnson, Karen Gillan, Jack Black, Kevin Hart, Danny DeVito, Danny Glover, Alex Wolff, Morgan Turner, Ser’Darius Blain and Madison Iseman.

When it comes to the Jumanji franchise, I hopped on the train a little late. I didn’t grow up with the 1981 movie starring Robin Williams, a movie which I have yet to see and I didn’t catch Welcome to The Jungle in cinemas when it was out. I remember when that movie came out, people couldn’t stop talking about it. Families loved it, it was making a ton of money and it was a genuine competition for Star Wars: The Last Jedi. The first time I watched it was this year back in January. My family was looking for a movie to watch and we decided to watch that one and it was easily the most fun, hilarious and entertaining movie we have ever watched. I have since watched it twice more and I’ve loved it every single time so I guess you could say I was excited for The Next Level. It was a sequel in which all I wanted was more of the same, maybe some new additions and elements to the story but what I really wanted was more of that special, electric magic from that 2017 movie and that is exactly what The Next Level offers.

Jumanji: The Next Level is a consistently hilarious and entertaining crowd-pleaser which will guarantee an incredibly fun time for anyone watching. It doesn’t try to be that different, it knows what made it’s predecessor such a delight and offers more of what we loved. That being said, The Next Level also has a ton of fun changing the rules of the game since it is busted. Actors play multiple characters and hilarious chaos ensues. The brilliant idea of changing who gets which avatar gives this movie it’s own special ingredient. The action in this movie is fun and at time hilarious, seeing The Rock as Danny DeVito discovering he has the powers of The Rock never gets old. There is one particular scene which involves the characters trying to get across using rotating rope-bridges while armies of monkeys are attacking them which really stood out. It looked great visually and it was genuinely a thrilling moment, there were some stakes because as you know they only have three lives, you believe there is a sense of genuine danger for these characters.

With this sequel being so incredibly similar to it’s predecessor, it’s inevitable that it’s going run into some problems. Most noticeably the movie lacks the originality of the 2017 movie and as far as structure goes, it’s basically the same movie but as they say, if it ain’t broke don’t fix it. The pacing is a bit odd though this time, the mission the characters were given made the movie loose that fast-paced energy because it involved the characters splitting up and doing side-quests and because of that it can drag in certain scenes. Other than that The Next Level is a perfectly fun and entertaining family movie. The thrilling musical score gets the audience pumped and ready for another adventure, it looks great visually and the movie constantly nails joke after joke. It’s definitely the type of movie enhanced by an audience, mine was having the time of their life. 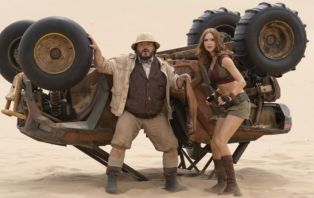 The one area The Next Level succeeds better at is the writing. The reason for why we get back into the game makes more sense and the touching ending make this movie a more emotionally rich story than the last. The cast do an amazing job, you can tell they had a ton of fun making this movie and it’s that infectious energy which translates into that genuinely fun experience at the cinema. Dwayne Johnson is as charismatic and hilarious as ever playing DeVito’s character. Even though we saw it in the previous movie, you can’t help but laugh at him discovering how awesome he is. It makes for some hilarious moments. However the true stars of the movie are Jack Black and Kevin Hart whose are the cause of the movie’s funniest scenes. Hart as the slow-talking Milo is so incredibly funny and his pairing with Johnson’s DeVito is gold. Their friendship is easily the heart of this movie for me. Karen Gillan got more to do which was great to see, Nick Jonas was underused, Awkwafina is amazing but I can’t really discuss her role without spoiling it.

Overall Jumanji: The Next Level does exactly what it’s supposed to, give us more of what we loved the first time while twisting certain things enough to make this adventure fresh enough. While I wouldn’t say this was a level up from the previous movie, it’s just as hilarious, enjoyable and a perfect family movie something we don’t see that often. While it has slower pacing and feels repetitive at times, it has a ton of heart and humour and it’s a genuinely fun time making this the perfect movie for the holiday season.

One thought on “Jumanji: The Next Level – Movie Review!”