Leonardo DiCaprio stars in ONCE UPON A TIME IN HOLLYWOOD. 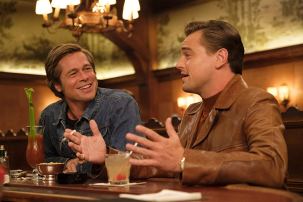 Once Upon a Time… In Hollywood is the supposed penultimate movie from acclaimed director Quentin Tarantino. This movie takes place in 1969 and focuses mainly on actor Rick Dalton who is struggling with his acting career as he keeps getting smaller roles. With him is his stuntman and best friend Cliff Booth. Meanwhile the film also follows the life of actress Sharon Tate. The movie stars Leonardo DiCaprio, Brad Pitt and Margot Robbie.

Once Upon a Time… In Hollywood is a movie which truly transports you to 1969 Hollywood. I did my research on 1960’s Hollywood and how it looked and also on The Golden Age of Hollywood. I saw tons of interviews with Tarantino exclaiming his love and nostalgia for 1960’s Hollywood and so I wanted to inverse myself into that era and I have to say, he nailed it. It’s incredible how much this movie feels like it’s actually from the 60’s. Every set and every shot, the clothes, the colours, it’s straight from the 60’s. This movie does to the 60’s what Stranger Things does for the 80’s.

On location of Columbia Pictures’ ONCE UPON A TIME IN HOLLYWOOD

As a movie, Once Upon a Time… In Hollywood is split up into three different arcs that almost feel like three different movies. It’s like an anthology movie, if that makes sense. The first act plays like an homage to 1960’s Hollywood, the second act focuses on Rick and his career and the third act on the infamous Manson tragedy. This being said, I couldn’t really summarize the movie if I wanted to. This movie doesn’t have a main story, there isn’t a single plot-line that gets closure in my opinion. Is it about the friendship between Rick and Cliff? Is it about Rick’s acting career? Is it about the Manson murders and Sharon Tate? Well apparently not because after the movie Tarantino made it crystal clear that it’s not despite the fact that the entire third act is a lead up to the Manson murders.

All of this being said, are these three acts at least good? Weirdly enough the movie makes the first two acts work but goes off the rails in the third act. However the charm and coolness of not only the characters but the setting make the movie incredibly entertaining. Not much happens in the first two acts, most of the time it’s literally the characters going about their day-to-day lives, so either Rick is acting, Cliff is driving, Sharon is doing errands. The second act mostly revolves around Rick trying to turn his luck around by giving a greater performance than usual and it shows the entire process of the filming of a scene which if I’m being honest wasn’t all that engaging but in retrospect it was needed to add to his arc. I’m glad it was there and when he does get the job done it was very rewarding not only for him but the audience as well. The third act, while entertaining, it felt like a completely different movie. It didn’t give any character some closure, the way Tarantino dealt with The Manson Murders felt wrong to me and the ending felt incomplete. 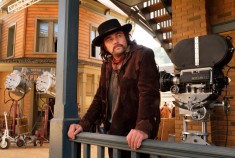 One thing a lot of people seem to argue about is who the main character of the movie is, some say it’s Rick or Cliff and others say it’s Sharon. To me this is very clearly Rick’s movie. The story revolved around him (until that unnecessary third act). Cliff’s purpose in the movie is questionable. He doesn’t even get any closure. His purpose in the second act came out of nowhere. His trip to Spahn Ranch was unnecessary but I guess the movie needed to fill the ridiculous 2 hour 41 minute runtime. Sharon’s role in this movie is very brief however she does have my favourite scene in the movie which is the scene where she watches her own movie with an interactive audience. It would’ve been perfect had it not been for the extremely unnecessary foot shots but we know Tarantino has quite the opinion on that.

The performances in this movie are great. DiCaprio gives a fantastic performance as Rick Dalton. This character allows him to include his comedic side which really shines when he uses it. He is hilarious in this movie. My favourite scenes with DiCaprio are the scenes he shares with a young actress whom he takes advice from. It’s a long scene but it feels real and authentic. The young actress played by young actress Julia Butters did an amazing job. Pitt also gave a great performance, just like DiCaprio whenever his comedic acting came in, he was instantly hilarious. However Cliff Booth (Pitt) has a darker background and how he reflects on it and even his role in the third act made for a very memorable character. It’s an incredible shame how his character got handled in the ending. The chemistry, charm and energy DiCaprio and Pitt bring to this movie is undeniable. It’s one of the few saving graces of this movie. Robbie was good, she didn’t really get any scenes to show her acting range. Also Maya Hawke (Robin from Stranger Things) and Sydney Sweeney (Cassie from Euphoria) were in this, it was such a pleasant surprise!

Overall Once Upon a Time… In Hollywood offers a lot even though it doesn’t fully deliver on it’s potential. The movie is a mixed bag for me, there was aspects which I loved and there were aspects which I found odd and misplaced. The controversy puts a rather big stain on the movie and there are bits of this movie which are plain odd and have no purpose. While the movie might not stick the landing, the great performances by DiCaprio and Pitt and the spectacular 1969 setting make this movie feel like an experience no one can ever really compare it to. All of this being said I honestly don’t know what Tarantino wanted to say with this movie. There wasn’t enough story, especially for that bloated runtime. Some say less is more but with this movie, that’s not the case.